If you click on the links below to the following blogs, you'll see they've organized a group build based around Hawker aircraft, specificaly those named after particularly bad weather (Tempest, Hurricane, etc.)

I dug the two kits out of the cellar this morning and will post a few WIP pictures along the way once the group build begins after 01st May. 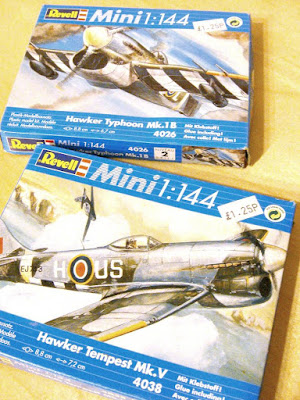 You can join up on the group build by contacting either Nick, Paul or Jacksarge on their respective blogs.

The deadline for signing up is 30th April.

I'm falling behind the other fellas out there who have been steadily progressing with their respective Hawker "Weather Event" group builds, so following on from the first post (Part 1), I've uploaded some pictures here of the sprues of the two Revell 1/144 Typhoon and Tempest kits I'll be putting together. 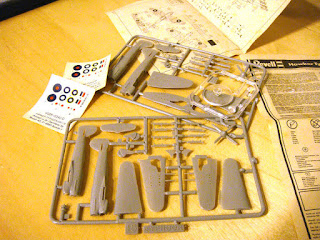 After opening the old dusty 20-year-old boxes, the instructions look and feel like old yellowed parchment, but the kits are in perfect shape, no missing parts and they look two nice and simple models.

No pilots are included though unfortunately. 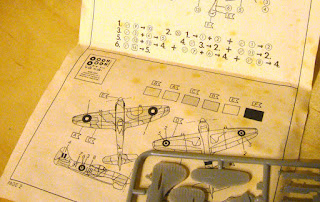 Moved on a little with the 1/144 Revell Hawker Tempest and Typhoon kits this weekend..

Once I put the kits together I found that the parts fit more or less OK, but there are a fair few big gaps that needed filling. 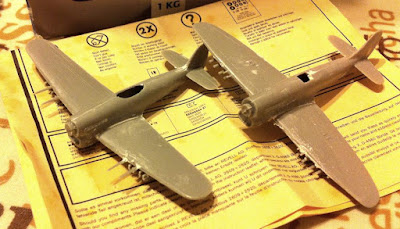 I wanted to build these with the undercarriage up but the raised wheel assemblies are a terrible fit, so much so that on one of them I gave up and chucked the bits in the bin and covered the hole with filler. 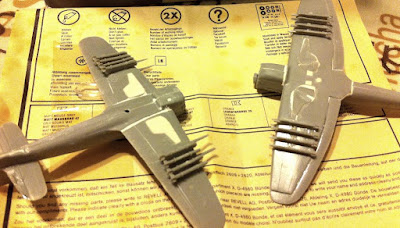 I also had to dispense with the propellers as the blades broke off from the nose cone as I took the parts off the sprue - so no choice now, I have to make a spinning prop whether I like it or not and will have to cut out a disk of clear plastic and stick it on later. 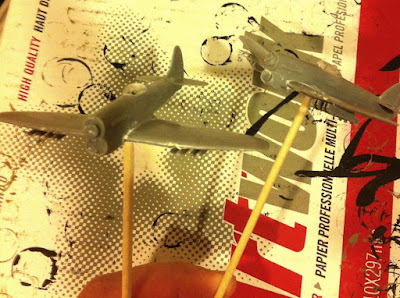 As far as the cockpits are concerned, I did a dry-fit to see if I should paint the model first then stick them on, but they didn't fit very and it would have left huge gaps, and as there were no pilots anyway, I just stuck them on, filled the gaps and decided that I would paint them black when I finally paint the models. 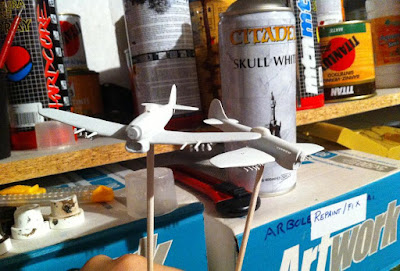 I used a GW white spray primer (skull white in the background) which is a pretty good base colour for hard plastic models and doesn't swamp the detail.

Spent an evening earlier on this week on the Tempest and Typhoon kits.

On the photo below, the model on the right was my first attempt at painting on the cammo. I used a GW "Catachan" green and a shade of Vallejo grey (can't remember which right now), but neither of the colours convinced me, especially as the GW green was too transparent and didn't have enough pigmentation. 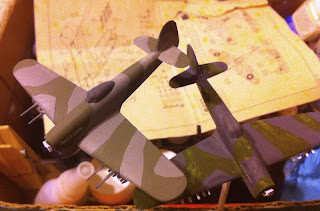 After painting the cammo, I painted on a yellow band on the leading edges of the wing using a couple of strips of Tamiya masking tape. 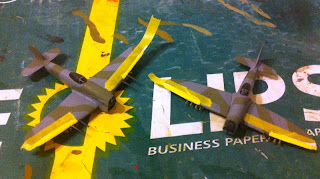 The rockets should be, I suspect, dark green or some other drab colour, but I wanted them to stand out so I used my wargaming artistic licence and used white. 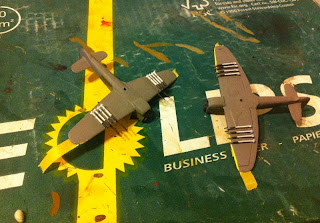 And finally the decals 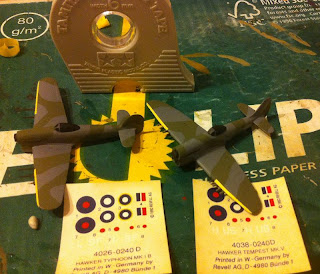 When I stuck them in water the first problem was that manufacturer's text on the decal sheet broke up into thousands of sticky little pieces. These little pieces invariably got transferred to the kits when I put the decals onto them.

The decals themselves also cracked when I put them onto the kits and when I tried wiping them down to avoid silvering they cracked even more. 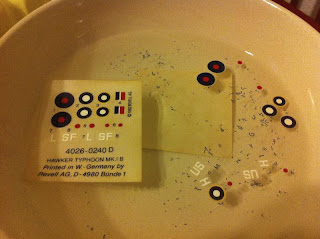 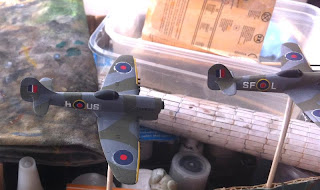 I'll touch up over the silvering and try a little handpainting over the decals to fill in the cracks and then maybe add D-Day stripes and cut out some transparent disks for the props and add the nose cones and finished.

Finally finished the Revell Tempest and Typhoon kits over the weekend ! 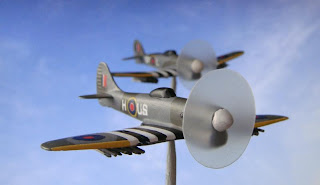 I mentioned in an earlier entry, the propeller blades broke off when I took the parts off the sprue so I made a "spinning" prop by cutting out a plastic disc.

I should have spent a little time sanding down the nose cones really as there are visible marks where the blades came off, but too late now and I suppose at this small scale it's not too noticeable. 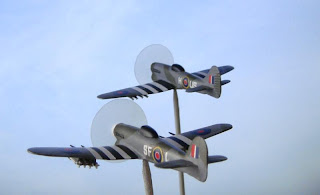 After the disaster with the decals I had to hand-paint in over some cracks and bits of decal that were missing, and touched up over the silvering on the edge of the decals.

I painted the D-Day stripes on the wings but didn't bother with the rear fuselage as it would have been a nightmare trying to paint in and around the aircraft ID and roundel - in retrospect I should have painted them on before adding the decals (it's amazing how I realise how dumb I am after the event). 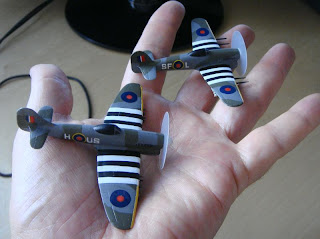 So there we are, finished at last.
I must say I really enjoyed participating with all the other fellas who were involved and have had a good time reading the updates on everyone else's respective blogs.

Thanks all, John
13 comments: