As a follow up to the "Ersatz" Opel Blitz pictures published on the blog last month,  my miniature allied arsenal also has some "funnies" that were pressed into service many moons ago.

A repainted Matchbox Battle Kings die-cast toy that a mate of mine Iván gave me when we first met and started gaming together on a regular basis some 20 years ago. 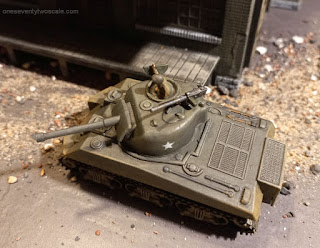 The Matchbox tracks were missing and were replaced with tracks off a Hasegawa 1/72nd scale M4A3E8 Sherman.

The tank commander is an Airfix British Paratrooper. 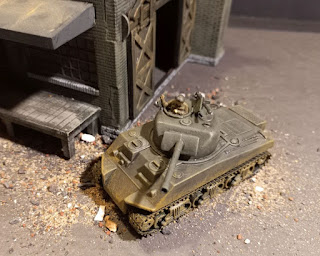 Even though it's oversized and clunky, it's seen some action as a Sherman Jumbo in a couple of games over the years.

When you compare it with a lovely detailed kit, like the Trumpeter Sherman below, it's toylike appearance is even more evident. Anyhow, even if it raises a few eyebrows when I next get it on the gaming table again I don't mind too much. 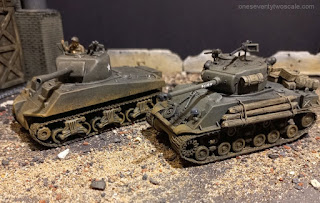 About the same time back in the early 2000's, my tiny, but growing US forces were in urgent need of some mobile artillery. Getting your hands an Esci M12 was difficult, but I had a Roco Minitanks 1/87 155mm M40, but without the HVSS suspension. 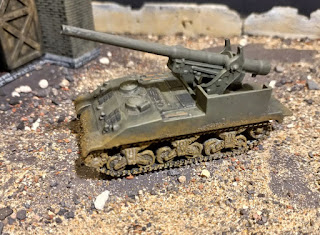 A broken 1/76 scale Sherman came to the rescue and donated its suspension and tracks to the allied cause, giving birth to this strange hybrid.

It's small next to a Matchbox M40 kit, but on the other hand, it's only a little smaller in size to a real Esci M12 - which I now have thankfully through Ebay, (and also now some excellent Altaya M12 diecasts). 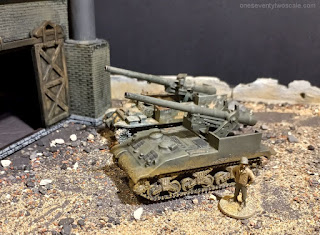 The British Shermans below were all made back in the early 2000's. 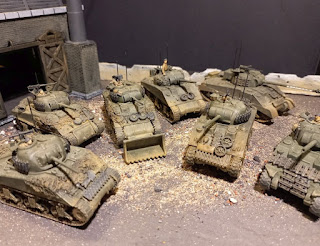 We were going to game a scenario that needed a Sherman dozer. A few days before the game I managed to get a hot-wheels bulldozer from a toyshop, fixed the blade onto the front of one of the Shermans and hey-presto ! Not very pretty but you can see what its function is. 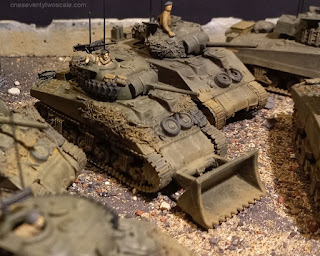 I did recently get a real dozer blade for my US forces. The blade came courtesy of a kit from UM Models.  Not sure if my version is comical or just sad in comparison. 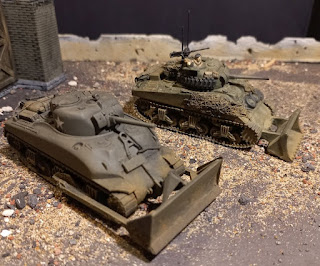 Thanks for visiting, hope you enjoyed the pictures. Will be back with some new stuff later in the month.
Cheers, John
3 comments: