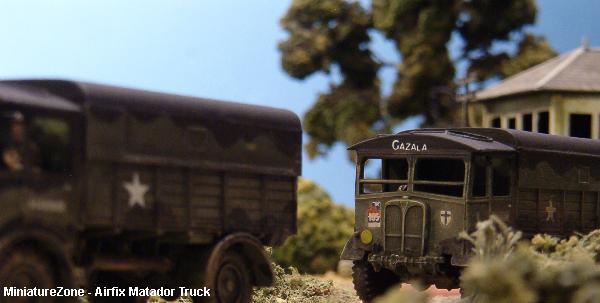 As an innocent young lad, one of the first kits I ever made was the Airfix Matador, bought from the local newsagent. (fingers full of polystyrene cement, wheels panted gloss black, silver hubcaps, and the wooden body painted gloss brown)

And after all those years, the kit is still available. 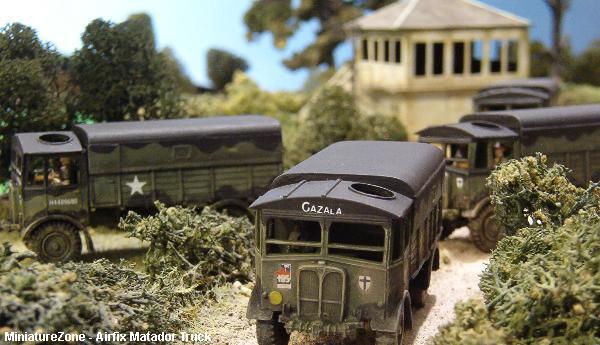 
Pictures from two separate games played within a week of each other. French patrols with a specific mission and with orders to bring back prisoners for interrogation.

The WW2 battle-hardened French Legionnaires had a great deal of success on the first occasion, but the second game was a definite win for the Viet Mihn. 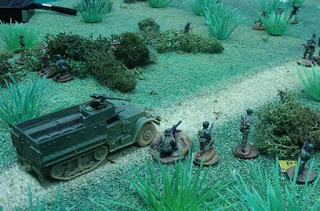 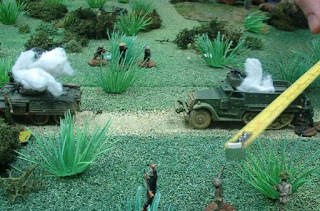 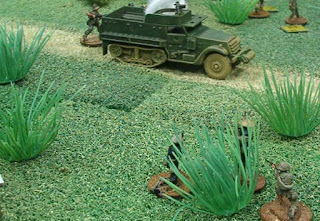 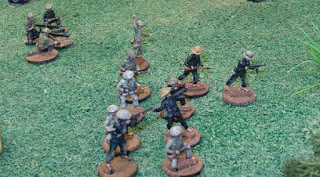 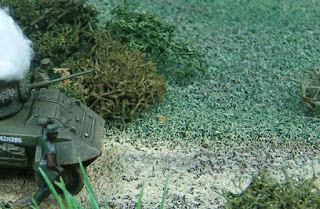 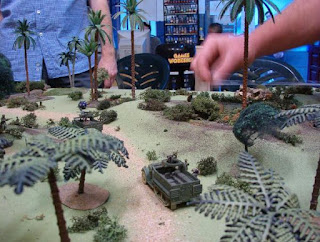 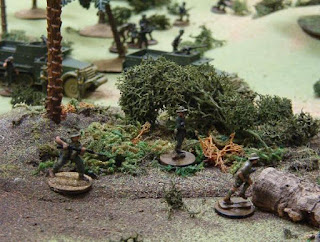 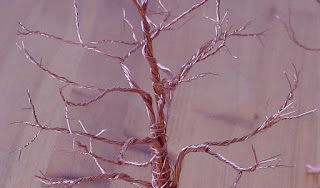 The technique of using twisted copper wire to make tree armatures is quite well known to railway enthusiasts, diorama builders and wargamers. 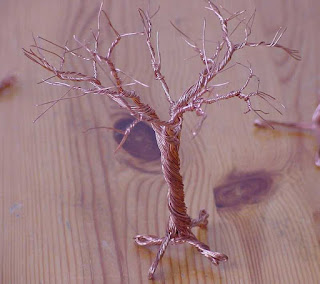 The twisted copper wire armatures have been covered with various layers of white glue and black paint and the foliage has been made from steel wool (like Brillo but without the soap) covered by dried herbs and scatter material. 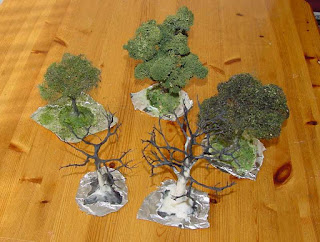 You can also use lichen, as can be seen on one of the trees in the photographs. 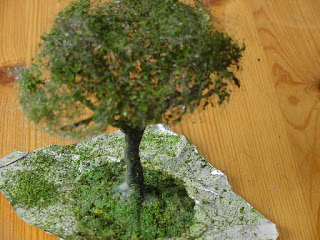 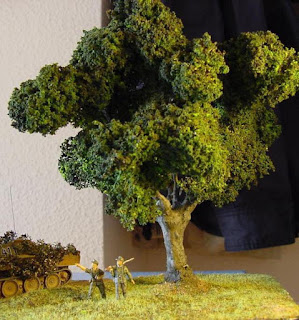 A quick Saturday morning game, the scenario was decided on the spot based on the figures, vehicles and scenery to hand - A Soviet counter-attack on a rail-station supplying the Axis forces on the outskirts of Leningrad.

The "snowy" wastelands were made from a 2m x 1m white cotton sheet (bought that same morning), spread over some hills and adorned with chunks of cork, pines and a little sand. The trains and rolling stock are from toy-sets, repainted to look dirty and full of grime

On Friday afternoon (the day before the game) I tried to buy a white bedsheet, I scoured the bedding section in a local hypermarket, I tried the "homemaker" sections in departments stores and they come in all colours under the sun, with flowers, nice pretty patterns, Spiderman designs, but white ? - No way, sorry, that's just for hotels it would seem.

So, before the game we ended up early in the morning searching for a warehouse where they sell material in bulk and found a roll of just what we were looking for. (Now they also had some nice khaki and green colours too ........ we'll be going back) 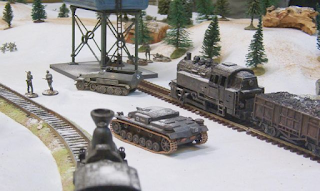 The Soviets began their advance with Alberto's infantry on foot under cover of the forest on the eastern flank of the railway line. Figures are mostly Revell Soviet Infantry & Siberian Rifles, with a few Esci figures. 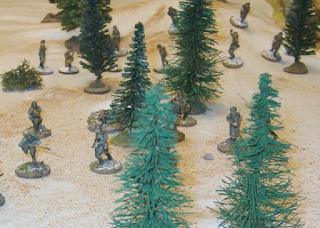 Meanwhile on the western flank, my tank riders on two lend-lease Matildas (Airfix kits) trundled across the snow towards the railway station.

A small section from the motorized troop began setting up a Maxim HMG in a copse to cover the advance. 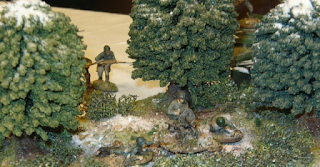 Only to be immediately wiped out by mortar fire directed by Carlos' German Forward Observer. 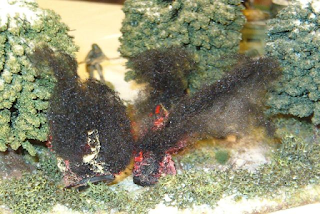 The German defenders (a mix of Airfix, Revell, Esci/Italeri figures) now with the Russian HMG out of action, charged out of the forest to try and capture the copse, under the guarding eye of a brave Sd.Kfz.231 (8-RAD) (Roden kit) 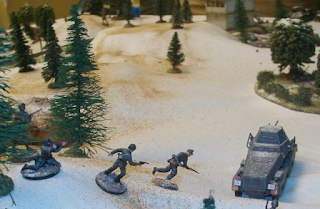 But it wasn't to be, they were sent scurrying back into the forest under a hail of gunfire from the Matildas who suddenly appeared from behind the copse. 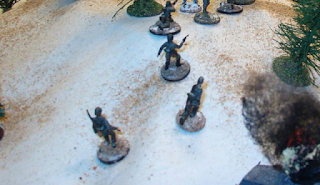 The first Matilda was immobilized by salvo from the German armoured car's 20mm gun blowing off on of it's tracks, while the second Matilda floundered in the in snow and mud and threw a track (one of my unlucky dice throws !), thus effectively halting the Soviet advance on the western flank.

Without a bark but still with a bite, the two Matildas respond with a heavy dose of 2pdr shells, leaving the German armoured car a burning wreck (just look at the Esci figure below on the left, cheering ecstatically) 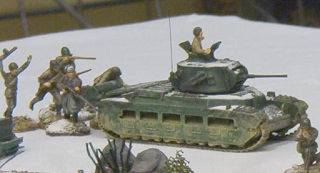 The motorized infantry dropped off the tanks, one section heading off into the copse to await a troop of T-34s in reserve (who never came throughout the game, due to more of my powerfully low scoring dice throws....... ) while the other section advanced on foot through the snow, only to be decimated by gunfire from the Germans hidden in the woods.

Meanwhile, over on the eastern flank Alberto's Soviet infantry were now pouring out through the forest to attack the outer limits of the station head on.

They were met with fierce resistance from riflemen, infantry and vehicle-mounted MG42s, inflicting heavy casualties. 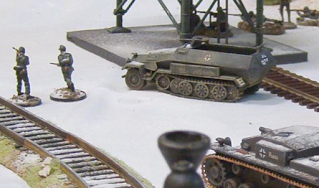 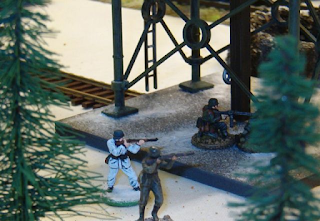 The Soviets manage to get to two of their men to the station outhouses, potential grenade-throwing heroes !

One tried to lob a grenade into an AT gun-emplacement - a captured soviet 76mm AT gun (SHQ metal gun, manned by some Airfix hard-plastic figures and an "unidentified" metal figure), but fumbled the throw and dropped the grenade at his feet .........

Another grenade through the window of the outhouse to take out an MG-42 position was quickly picked up the Germans who threw it back, out the way it came, exploding harmlessly in the courtyard.

Not much luck there. 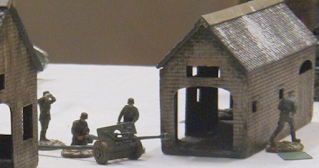 However, on the other side of the outhouses, Alberto's Soviets had much more luck, destroying a Half-Track and crew with a grenade lobbed right inside, while a PTRD man with a well-aimed shot took out a Pz III single-handedly (no damned photos of those burning wrecks !!! - too much excitement) 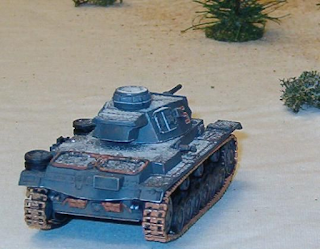 My Russians in the copse, becoming increasingly nervous at my dice-throwing ineptitude and seeing that those T-34s would never come, decided to make one last desperate attempt to flush out the Germans in the forest charging across the snowy wastes, suffering (surprisingly) few casualties, to engage the Germans in fierce hand-to-hand combat. 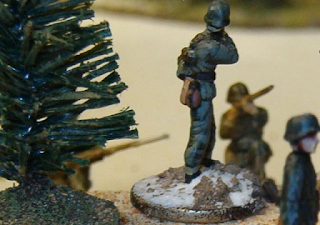 But at this point, sadly due to a time limit, we had to leave the game for another day.

The Germans had lost a Pz III, an armoured car and one half-track, and a small handful of troops, but they were still holding onto the station, they still had a AT capability (a StuG III and a captured 76mm AT position), and a mortar position safely emplaced well out of sight of the enemy.

The Soviets had reached the edge of the train station but had no armour nor HMGs to support them. The human wave assault had made some impact on the edge of the train station, but at the price of heavy casualties. The reinforcements (two of my old wrecks below) never actually got onto the table and without any armour support the Soviets had no chance of making any further impact. 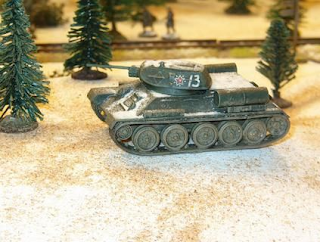 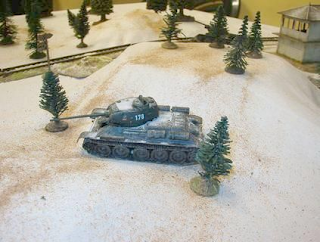