In this article, some examples of painting for figures of the WWII German army are indicated.

In these scales, the paintings are more complex, with varied shades of the same color for shadows, bends, The indicated colors, in the painting schemes, are of the Humbrol brand and are indicated in several ways:


DESCRIPTION:
One of the most controversial points, for the painting of the uniforms of the German army, is his greenish-gray color (field gray). In reality, they were green ... The problem is that there were so many manufacturers of uniforms, which gave origin to various shades of color and also, could still vary, in accordance with the type and quality of the fabric ...

To reproduce that color, we use a dark green that will be mixed with several small amounts of ashen for the various shades: 66 + 111. The Humbrol used to have a color, very acceptable for these figures: the 108 (WWI green), but, it is not indicated in the most recent catalogs ...

In relation to the equipment, one of the most representative pieces, of a German soldier, was his helmet, a descendant of that used in the WWI and was made of steel with 1.2mm of thickness. The first ones, model 1935, had lateral insignia that represented the various armed forces. As a curiosity: tradition says, compared to the French Army's helmet, while it was drawn by a group of artists, the German helmet was designed by a group of doctors. It will not be by chance that many armies, today, use a helmet with a similar design ...

Another typical element, of the German soldier, was the gas mask case, which was made of stamped steel, being, in tone of color, a little lighter than the helmet: 66 + 111, (66 + 102) . The cup and the receptacle for water, were made of aluminum, the latter lined with felt.

To complete the equipment, it is necessary to reference a shovel and the harness, consisting of a belt, belt loops, cartridge belts, etc ...

1 - This is an infantry soldier, fully equipped, in the early years of the war. The colors of the jacket and the pants could vary in tone, with the pants being slightly darker. 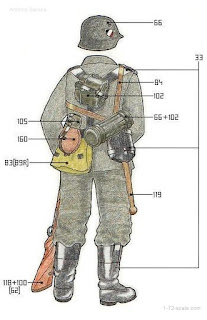 2- It is a non-commissioned officer, identified by the silver bands, around the neck. This jacket, with dark green collar, indicative of the early days of the war, was soon abandoned to be made of the same cloth. It has the bicornio (feldmutze), model 1938, characteristic of the infantry. 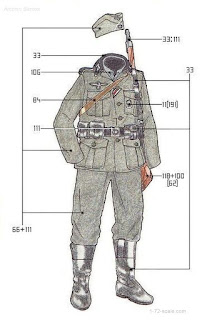 3- It is an artillery officer, as indicated by the red strips, in boné and platinas. The other colors, to represent the different weapons, are: rodent for the crazed forces, the target for the infantry and the green for the panzergrenaderos. These colors, in the soldiers, are painted around the platinums and, in an inverted "V", in the bicorns and bones. This officer, you saw riding breeches, darker than the blouse and boots, also riding. 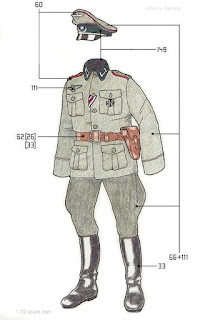 4 - This 1st panzergrenadier, as indicated by the "V" in the arm and green lists on the plates, carries the famous weapon Mauser "Karabiner" Gwehr98 (G98). This model is a descendant of other Mauser, with some modifications, which were used since the end of the XIX century, passing WWI, being this model acquired by several countries, such as Spain and Portugal. It was used, with some improvements, attached to the 1960s. 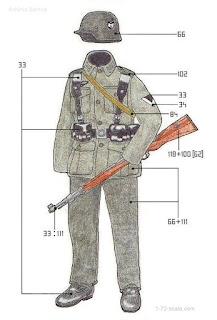 5 - This camouflage scheme is distinctive of the Wehrmacht. It was characterized by spots with straight ridges, known as "flakes". The whole, was dotted with a "rain" of green stripes.
The jacket, the pants and the cover of the cap are reversible, being on the other side, white. In this case, we know that we are in the end of the war (44-45), because he wears boots with a short spout, with canvas leggings, which, due to a shortage of material and low price, will replace the army's famous army boots. German. 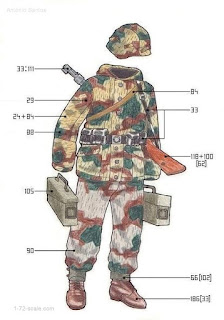 6 - This shooter, carries an MG42, considered by many, the best machine gun of the war and that, after 1945, was adopted by several countries.  He has dressed a "tarnajacke" with the typical camouflaged infantry.  In the helmet, it has branches fixed with an inner tube removed from a tyre. 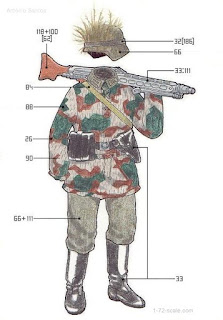 7- Soldier of the Afrika Korps. The white cloth, served to cover the face during storms of sand or clouds of dust, erected by vehicles. In the capacete, dark spots were applied to disguise the brightness and avoid reflections the long distances. 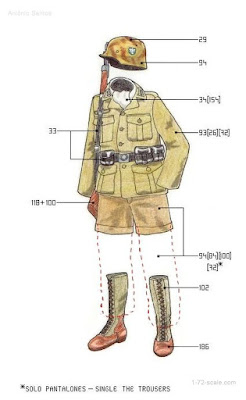 The pants were more used than the calzones - mainly, on the battle front - and existed in two colors: green (72) or sand. These high-waisted boots, in fabric, albeit not too hard and breathe well, avoid twisting the foot ankle, when apertadas. The soldiers, in the general, wore short-barreled boots and some, like "a la ingles" type ...

8- This type of camouflage was rare, being used mainly by drivers. It has rounded edges, type "cloud".

The "jerrycan" has a white cross painted, a sign that it carries water. 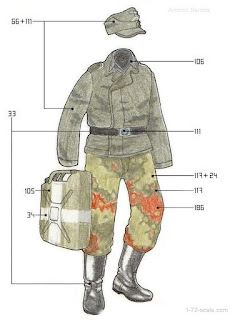 .
9, 10, 11 - They are a medical team from the Wehrmacht.
The doctor is the one with the big red cross in the cap. The duas bags, to the forehead, contains first aid. It is noteworthy that the receptacles of the water, are not fixed to the belt. 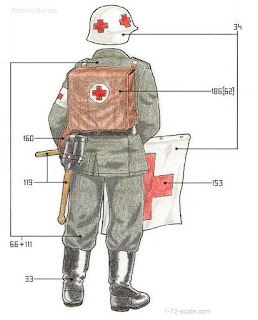 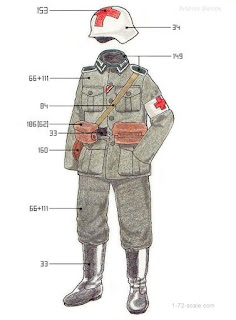 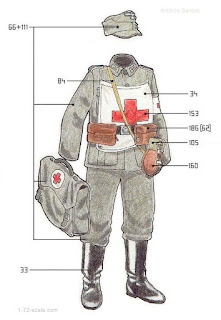 12- It is an official, mounted, of the artillery, identified as such, by the bag of maps that it transports.
The German army, never dispensed with horses and carts (son tudo to disfarzar this situation), to solve their transport problems! ... 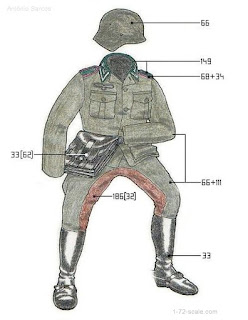 13º- Soldier of the air force (Lufwaffe). The uniform is the same as that of the Wehrmacht, being bluish gray and not blue, as in some prints. The equipment and armament was equal to that of the other forces
German

14th - The paratroopers (fallshirmajaguer), were considered an elite force, of the German army, being linked to the Lufwaffe. 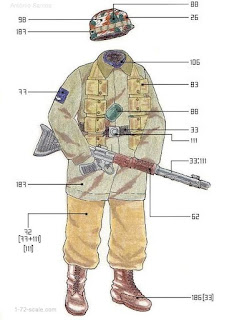 The helmet, is the same as the 1938 model, only that, in a trimmed version. The piece, which most distinguished the paratroopers, was his jump blouse, made of cotton and dressed over the common uniform. The first ones were green clear ashen, but, later, those that came to be the most common were distributed: with the camouflage, typical, of the Wehrmacht- type in "flakes".

The airborne troops, had some exclusive equipment, as in this case, the bandoliers to load the ammunition (which also had in the camouflaged version) and the weapon, automatic, FG42. 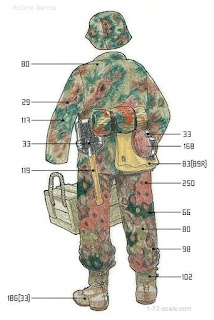 16 - This camouflage was quite used - being, perhaps, the most famous - and it was in the most known battlefields (Europe), after D-Day. The harried forces, of the Waffe-SS, also used this type of camouflage . 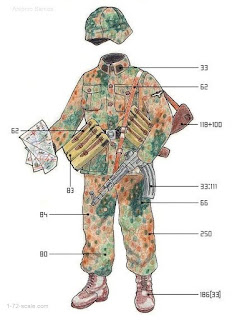 It is constituted by four colors, being the lightest, the first to be painted and the last, the darkest.

The weapon is an STG44-Sturmgeweehr - assault rifle. His manufacture was decentralized: some factories made the pieces, others made the assembly. He was quite successful on several fronts, but due to lack of raw material and other military priorities, his production was insignificant. His drawing inspired many post-war weapons, being considered the "mother" of all assault rifles.

Finally, it is noteworthy that the eagle passed from the chest to the left arm.

17th - This soldier has a camouflage indicated for autumn. In the arm, has two strips indicating the destruction of two tanks, at hand (grenades, mines ...). The weapon, antitank, is a Panzerfaust and was much used, at the end of the war, by the Wehrmacht , being a characteristic of the last defenders of Berlin. 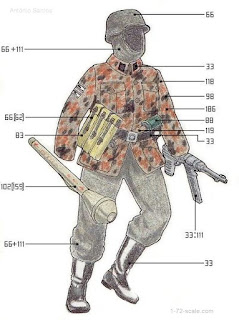 The gun is an MP40 and was very popular in the German army. Derived from the MP38, officially adopted in 1938, the first has incorporated a splittable carriage. It only made automatic shot and the first ones did not have lock of surenza, the one that during the transport, they could shoot, coincidentally, the any moment ...

COLORS:
The colors and the respective equivalences, which I will indicate, are those that were not mentioned in the last articles.