A new painted "Control Trooper" sporting a riot helmet. He's accompanied by a Stryker from the "World Order" policing forces.

I've seen a lot of 15mm Sci-Fi figures on various blogs that have really inspired me into getting into the genre.

Unfortunately 15mm metals are out (maybe at least until I retire that is) as I've enough 1:72 plastic to sink a battleship. Besides which, my first love has always been plastic 20mm / 1:72 scale so I decided to try my hand at converting some figures from various modern-day sets to see how they turned out.

These are some of the first attempts and I'm quite pleased how they're coming along. 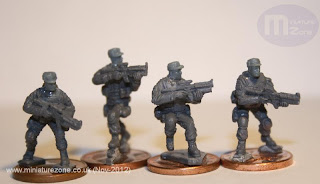 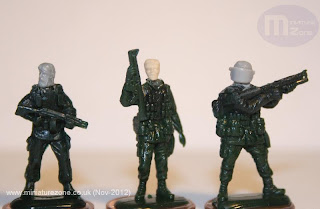 I've cut off the ends of the gun barrels - I think it makes them look like fairly reasonable future "blast" weapons.
By JohnM - November 24, 2012