In the midst of a war between various factions in an imaginary country, a squad of U.N. soldiers has been tasked with taking a ransom payment of 50 million dollars to a meeting point in the war-torn city.

On their journey to deliver the ransom money to the group that has the two allied pilots as hostages, they've stumbled into the middle of a battle between multiple rival factions fighting each other.

The U.N. VAB carrying the ransom money on its way to the drop-off point has been hit by an RPG fired by one of the warring factions and completely immobilized.

Apart from fighting each other, all the factions are targeting any foreign troops that cross their path or come into their field of view.

Player 1 - International UN troops stranded / wounded around the VAB. They have to find cover and fight off any attacks until rescued.

Player 2 - French Legionnaires under UN command - tasked with reaching the VAB and bring the UN troops back to safety.

Player 3 - US special forces with two armed local interpreters enter the city - their mission, to locate the detained pilots and get them out of there

Player 4 - A corrupt local government official has knowledge of the plan to pay the ransom and has  dispatched a group of mercenaries to head out and intercept the ransom payment and keep it for themselves.

Player 5 -  German special forces from the KSK have discovered the corrupt government official's plan and they have been sent to intercept the mercenaries.

Player 6 - Umpire and warring factions. The umpire has informed each player separately about their mission, none of them know the others' missions. He also controls the warring factions' actions and appearance on the table using dice generating random events, actions and numbers.

The disabled VAB burns in a small plaza. The UN troops bail out. 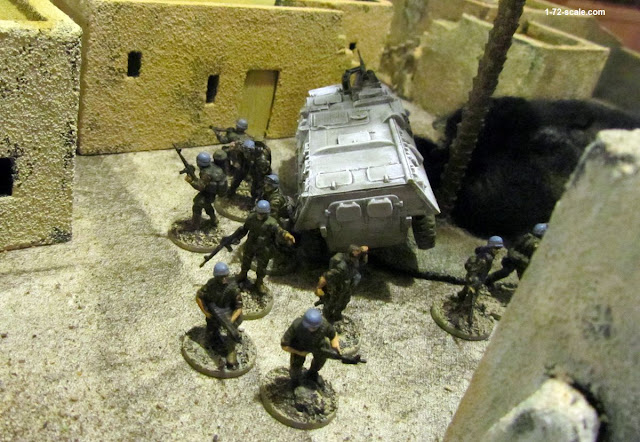 They scramble to find shelter in nearby buildings under heavy fire from all sides. 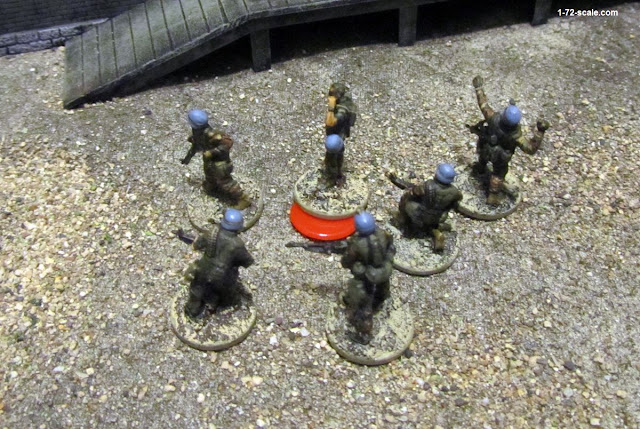 US troops enter the table accompanied by an armed interpreter. 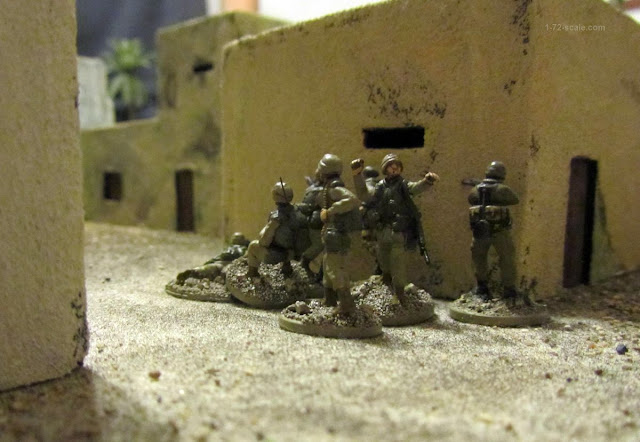 KSK carry out a brief recon of the neighbourhood from a rooftop position on the edge of town. Intel tells them the mercenaries will be entering from this area. 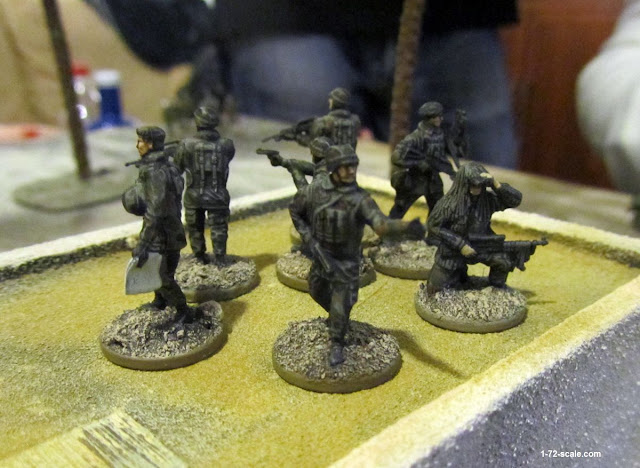 Bloodthirsty mercenaries prepare to make their way to the plaza to try and get their hands on the booty. 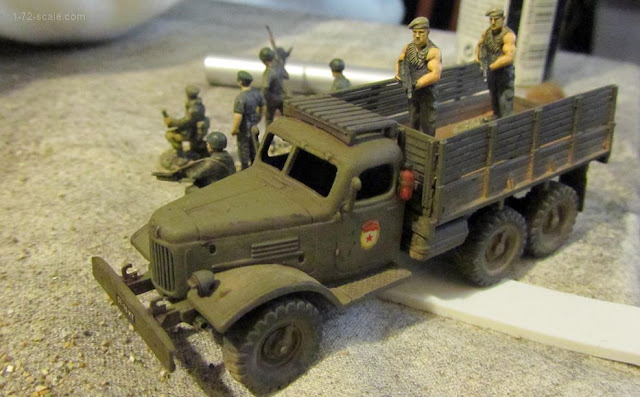 Over on the other side of the neighbourhood, a small group of French Legionnaires make their way on foot through the backstreets. 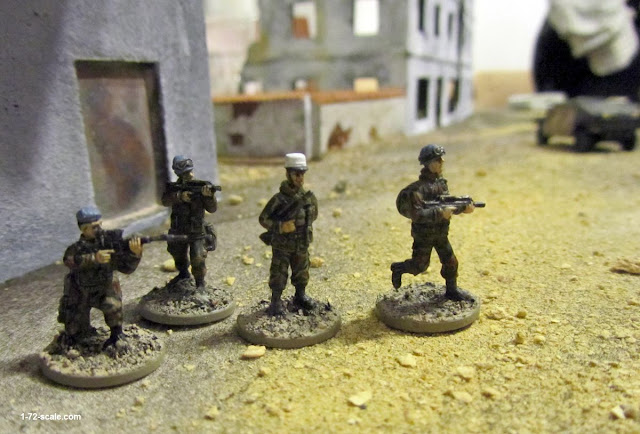 All the time warring factions take potshots from the rooftops at each other and also at any foreign troops that move within their field of view. 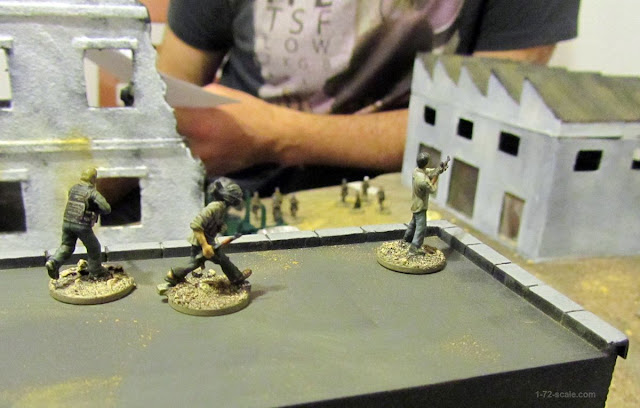 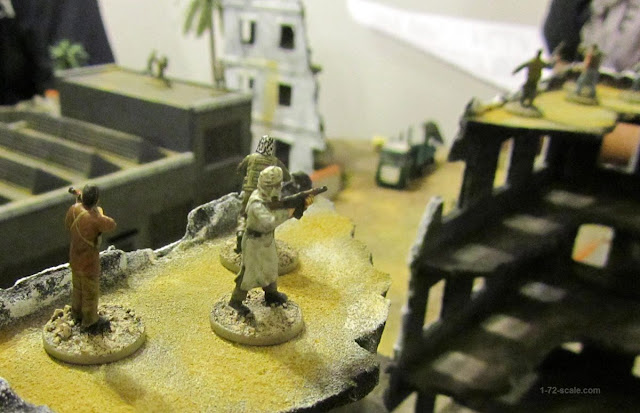 As the mercenaries near the plaza, they find the road blocked by a large oil tanker lorry 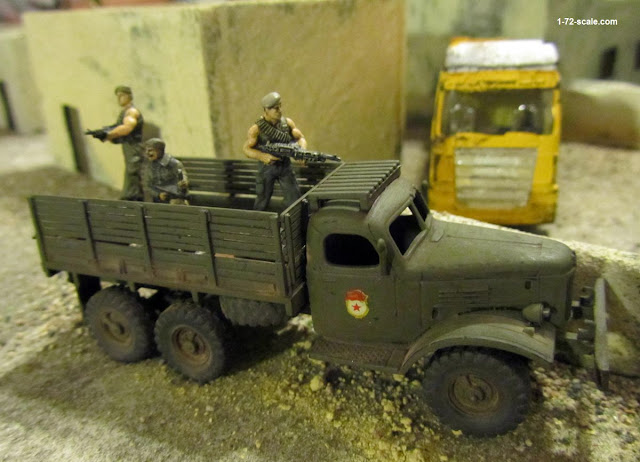 They dismount and head out on foot 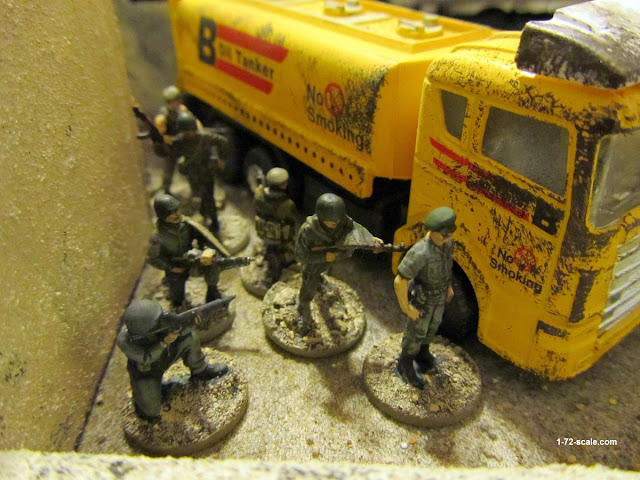 German KSK commandos swiftly reach the plaza, confer with the UN troops and quickly "rescue" the ransom money to exit town before the mercenaries even get there. 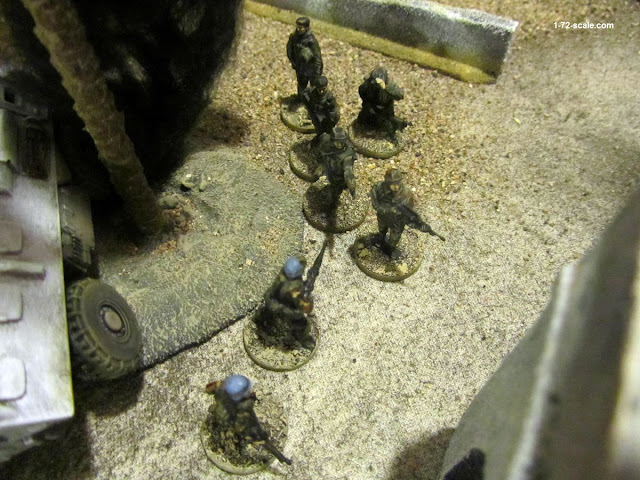 One turn later and the Legionnaires reach the disabled VAB, and together with the UN troops they make a fighting retreat, evacuating the stunned and wounded 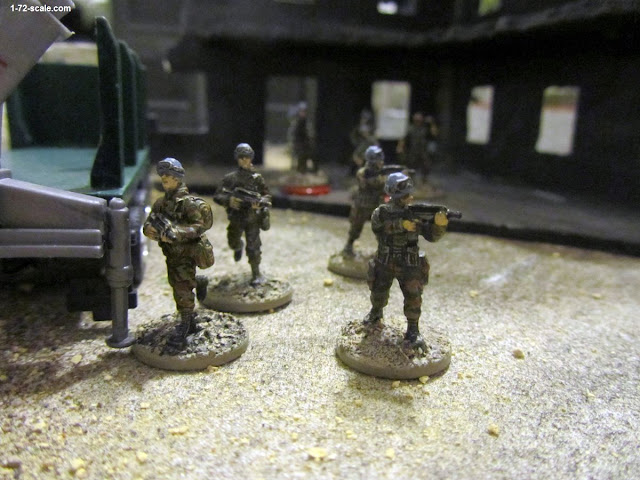 The group finally makes it back to the outskirts of town and to safety. 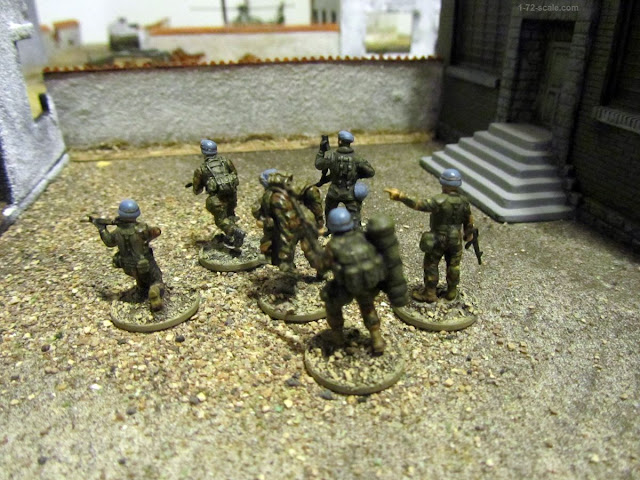 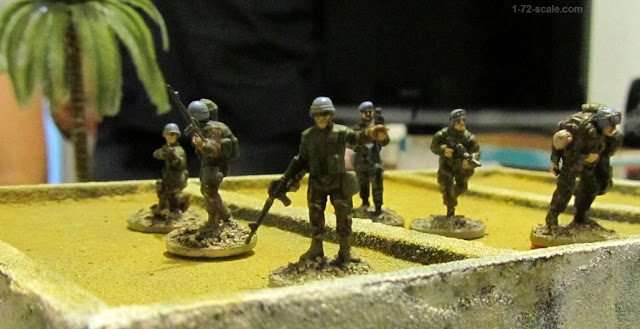 The US troops also managed to locate the pilots and bring them back to safety (but no pictures unfortunately), while the mercenaries never reached the town centre and were practically wiped out by a large group of local militia who stumbled into them when the umpire revealed a random event card.

There was a lot of action during the game, a lot of firing and a lot of fun - and of course we always keep in mind that thankfully this is just a game with toy soldiers.