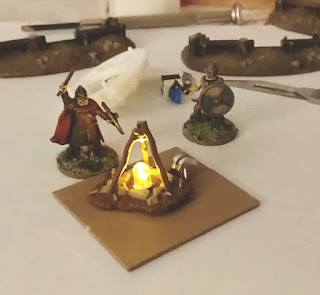 I've been meaning to do this for a while after seeing tons of great stuff by people online using flickering LED candles for a whole variety of stuff.

This is just a mock-up, to see how it looks and have to permanently base it.

A clumsy hamfisted "smoke" test below using some pillow stuffing to stick on the LED.


I'll have to hide the battery which will probably end up under a removable bush on one exteme of the stand.


The campfire itself is from the 1/72 scale Italeri Desert Well and Tents set and the Zvezda Vikings standing around in awe at the wonders of modern miniature firemaking technology are there to give an idea of the scale size.