The Seehund midget submarine is actually a 1/87 piece from the Dutch company Artitech. The kit consists of a beautiful one-piece casting and some smaller resin parts; you get two of these waterline subs in one box (or rather bag). I binned the smaller resin parts, made new periscopes and vacuformed a new perspex cupola.
Comparing the result with various references showed two interesting things: 1) there were many small differences between the subs that were actually built and 2) the kit's conning tower is too large for 1/87. This actually made me quite happy - I converted an Airfix MP into a RN officer, and voila: Kiel, August 1945, collection point for ex-Kriegsmarine hardware.

This was really a fun project. Scratchbuilding the smaller parts took perhaps 15 minutes, the rest was painting and  enjoying the result, which could serve as a nice accessory to a harbour layout for a wargame. 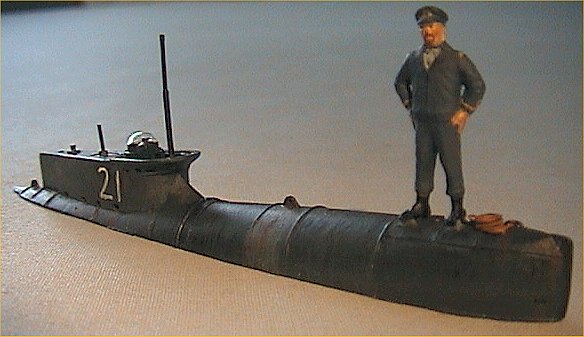